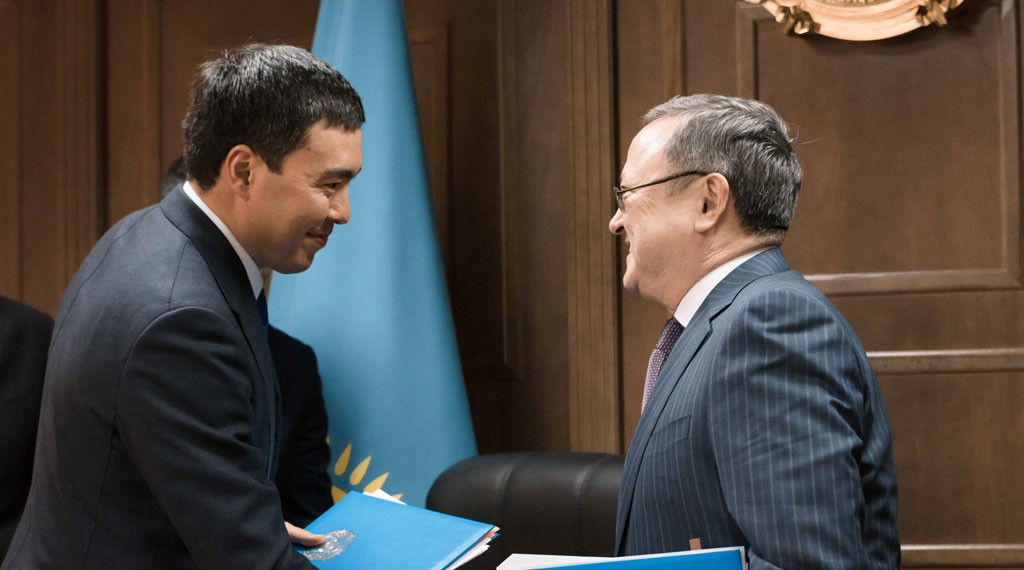 The funds will be used to purchase: medical equipment and attract young specialists for Khromtau Central Hospital, overhaul heating supply, repair water line and municipal sewage lines, strengthen the material and technical base of the Khromtau mining technical college, installation of children’s and sports playgrounds in Khromtau and the village of Don, construction of an field-and-track arena in Aktobe, support for other social, cultural and sports projects.

The corresponding Memorandum was signed today by the First Deputy of Chief Executive Officer of the Eurasian Resources Group (ERG) Aldiyar Kaztayev and Akim of the Aktobe region Ondasyn Urazalin.

Aktobe enterprises that are part of the ERG, are of great importance for the development of the regional economy. It is gratifying that you also take an active part in the implementation of the important regional development task set by the Head of State. Investments, which this year ERG intends to invest in the development of our region will be a good support for Aktobe — said Ondasyn Urazalin.

The amount allocated under the Memorandum ERG in 2019 amounted to 3.2 billion tenge.

The Eurasian Group conducted comprehensive inspections in single-industry towns where ERG enterprises are located. According to the results of a survey of company employees and residents of these localities, probles and pressing questions that require close attention was identified.

On the basis of these sociological research, socially significant projects were developed and options were proposed for their implementation within the framework of the three-year Regional Development Program approved by the Government of the Republic of Kazakhstan. They will be financed from both the republican and local budgets, and from the Eurasian Resources Group. The Memorandum signed today is also developed on the basis of these studies, and within these three-year programs.

Traditionally, funds will be directed to socially significant projects of the Aktobe region, as well as to the socio-economic development of the region and its infrastructure, including within the Eurasian Resources Group program “Tugan Jer — Native Towns”.

— This year we are also starting construction of a kindergarten in the new part of Khromtau with 320 places worth 850 million tenge. This socially significant project is being implemented as part of a public-private partnership, “said Alexander Mashkevich, Chairman of the ERG Board of Directors. — We are grateful to the Akimat for the opportunity to make the life of our “native cities” better and more comfortable. And it is especially pleasant that our employees living here take the initiative year after year. We hope that together we will ensure a stable and promising future for the region.

For over 15 years, the Eurasian Group (ERG) annually concludes memorandums on the implementation of socially significant projects in the Aktyubinsk, Kostanay and Pavlodar regions, where the Group’s enterprises are located. In general, over the past 5 years from 2014 to 2018, the social investment of the Eurasian Group exceeded 107 billion tenge.